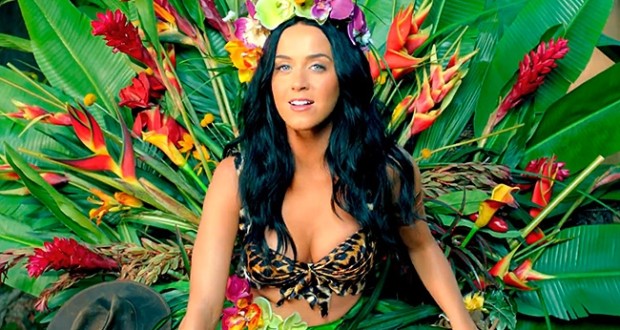 from goddiscussion.com: The pop star came out and said "I'm not Christian," despite her conservative Christian upbringing and getting her start in gospel music. Katy Perry first put out a gospel record in February 2001 under her real name Katy Hudson. Since then, she has switched over to pop music.

Perry said in an interview with Marie Claire "I don't believe in heave or hell or an old man sitting on a throne. I believe in a higher power bigger than me because that keeps me accountable…I'm not Buddhist, I'm not Hindu, I'm not Christian, but I still feel like I have a deep connection with God. I pray all the time – for self-control, for humility." While not a Christian, she does describe herself as spiritual. She reads books written by the Eckhart Tolle. He is the author of The Power of Now and A New Earth.

Katy Perry was raised in a strict Christian household with both of her parents being Pentecostal pastors. Her upbringing was very conservative. She told Entertainment Weekly "The only things I was allowed to listen to were the Sister Act 1 and 2 soundtracks." She was also not permitted to watch MTV or VH1. Perry rebelled at the age of 13 by getting her nose pierced. Her first Christian album, Katy Hudson, reportedly reached only 100 people. The label then went bankrupt. Later, Perry moved to Los Angeles to pursue her singing career. She has had numerous hit songs since her breakout in 2008.

Perry is not the first artists to turn from Christian roots to secularism. The lead singer of OneRepublic, Ryan Tedder, did as well. Along with singers, there is a long list of religious leaders as well. As secularism becomes more accepted, more and more people will start coming out as non-believers.