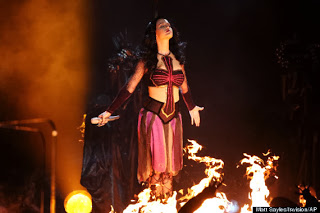 christiantoday.com: Pop star Katy Perry's performance of "Dark Horse" during the 2014 Grammy Awards on Sunday evening has shocked some fans as it displayed dark satanic imagery, including witchcraft and demons.

Perry was dressed as a witch and wore a Knights of Templar cross across her chest during the performance. She also pole-danced on a broom, and was finally burned at the stake towards the end of her controversial ensemble on the awards show, which is watched by families across the world.

Fans took to Twitter to express their opinions about Perry's controversial "Dark Horse" performance... "FIRST IT WAS LORDE SUMMONING THE DEVIL, NOW HERE COME KATY PERRY AND HER WITCHCRAFT"

The 29-year-old, who was raised in a strong Christian household, recently rejected her former religion in an interview with Marie Claire. She told the magazine in its December 2013 issue that she is no longer a Christian and does not believe in heaven or hell. She has indicated that she does believe in God but that she does not associate with any religion.

Perry said, "I'm not Buddhist, I'm not Hindu, I'm not Christian, but I still feel like I have a deep connection with God. I pray all the time — for self-control, for humility. There's a lot of gratitude in it. Just saying 'thank you' sometimes is better than asking for things."