Kill The Messenger, Resurrect The Dead 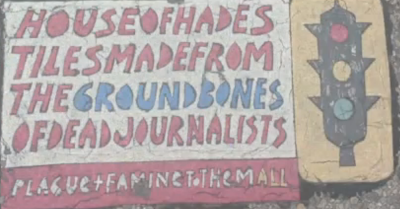 Clyde Lewis, Ground Zero Live host views Toynbee Tile, embedded in busy intersection of Second South and State Street in Salt Lake City, as a paranormal harbinger.  In article, “Kill The Messenger, Resurrect The Dead,” Lewis suspects responsible parties  “…a group called House of Hades that are particularly harsh to
journalists. Recently, there were two tiles that were considered
vandalism in Kansas and were removed by city crews. One of the tiles
about 1 by two feet was found in downtown Topeka and its inscription
read ‘House of Hades, One Man Versus American Media In Society 2011 Its been Fun.’  The recent one spotted in Salt Lake City speaking of dead journalists
seemed to be an awful coincidence when you consider the tragic story of
the death of Michael Hastings of Rolling Stone magazine.”  The present writer agrees work and commitment by a Toynbee tiler, represents much deeper phenomena, on par with common thought. politicians take letters more seriously than telephone calls.  It’s a sign, dissatisfaction among some people, is entering,  deeper realms.  Caroline Connolly, Salt Lake City Fox 13, does excellent reporting with full survey of the Toynbee Idea.  Has 2011 movie, “Resurrect Dead,” inspired a new genre and generation of political art form?  A 2012 post: “The Mysterious Toynbee Tiles:  Decades Old Urban Legend,” provides more info on tiles.  You haven’t fully experienced life unless you take in the Toynbee Tiles!