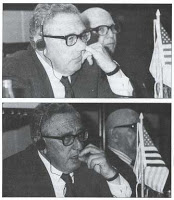 from raw story/blacklisted news: Former Secretary of State Henry Kissinger, an iconic conservative who continues to command the attention of the White House, praises President Bush's moves in Iraq and says that leaving the war-torn nation is not possible under present conditions.

Kissinger has penned an editorial in which he states that Bush's "bold decision to order a 'surge' of some 20,000 American troops for Iraq has brought the debate over the war to a defining stage. There will not be opportunity for another reassessment."

The elder statesman remarks that the early strategy of replacing U.S. forces with Iraqis was "in retrospect, premature," and says that the "most flagrant shortcoming of Iraqi forces" is that they are unclear on what they're fighting for and for whom.

Kissinger asserts that the Iraq war is part of a larger conflict, namely "the assault on the international order conducted by radical groups in both Islamic sects," particularly against the United States. He insists that despite public disenchantment with the war in Iraq, "under present conditions, withdrawal is not an option."

He calls America "the indispensable component of any attempt to build a new world order."

Perhaps most telling, Kissinger declares that the U.S. is in Iraq as "an expression of the American national interest to prevent the Iranian combination of imperialism and fundamentalist ideology from dominating a region on which the energy supplies of the industrial democracies depend."