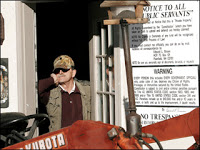 from ap/aol: A former militia man convicted of tax evasion prepared for a government siege Friday at his fortress-like home, but U.S. marshals gave no indication they were planning to confront him.

Ed Brown said he was ready for a swarm of federal agents to descend on his property to execute an arrest warrant issued after he failed to appear for the end of his trial. He and his wife contend that they did not have to pay income taxes, and his supporters say a conflict could be violent.

“If Mexico came up on my land and tried to take my land, would I not fight?” Brown said. “The United States is the same exact thing as Mexico in this state.”

Brown, 63, and his wife, Elaine, 65, were convicted Thursday of plotting to conceal their income and avoid paying federal income tax. They argued the tax is illegitimate and they are not required to pay it. 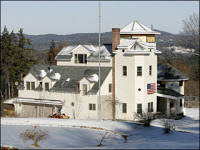 U.S. marshals said negotiations with Brown continue and they have no plans to attack Brown’s Plainfield home or act quickly on the arrest warrant. He has been holed up in his home with armed supporters for much of the trial.

Brown said he has a stock of food and supplies and that his home can run on wind and solar generators.

“It’s all set up for me to stay here forever,” Brown said by phone.

Elaine Brown, a dentist who earned most of the couple’s income, was staying at her son’s home in Worcester, Mass., pending the couple’s sentencing in April. She said she had no plans to return to Plainfield, where she fears there will be a violent confrontation.

The Browns’ case has found support on the Internet from militia members to libertarians and anti-tax groups.

Rick Stanley, a Denver-based Web radio host and a militia leader, urged listeners to join Brown at his home.

“We are continuing to ask patriots to surround Ed Brown’s property and life with a ring of armed Americans with firearms and video cameras to protect a fellow American,” he said. “This is the flash point. This is the time of raised pitchforks.”