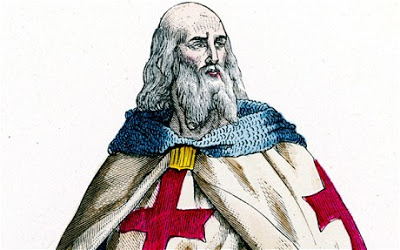 from telegraph: The last Grand Master of the warrior monks who fought in the Crusades, Jacques de Molay, was executed in Paris in 1314 on charges of heresy, black magic and idolatry. His death was part of a concerted campaign to suppress the chivalric order by King Philip IV of France, who had grown suspicious of the Templars' power and envious of their wealth. Although it was the French king who ordered de Molay to be put to death, the Templars have for centuries accused the Church in Rome of complicity. Pope Clement V initiated an inquest into the order which led to many knights being subjected to heresy trials, before disbanding altogether. The movement was reborn in the early 19th century as a charitable organisation and has branches around the world.

The Italian chapter of the order has written to Pope Benedict XVI asking him to issue a pardon for de Molay and to acknowledge that he was a victim of false accusations. "There was an enormous degree of complicity because Clement V, who was Pope at the time, was under huge pressure from King Philip," Walter Grandis, 64, the current head of Grand Prior of the Knights Templar in Italy, told The Daily Telegraph. "This was an appalling crime and a miscarriage of justice that the Church allowed to happen... We're asking for de Molay to be pardoned so that we can finally turn a page in history and work towards reconciliation," said Mr Grandis, who recently wrote a book on the order, called The Templars: The Real Secret.