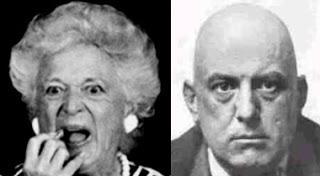 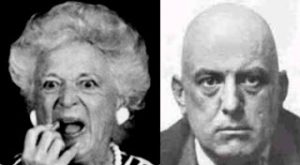 Anyone who realizes the evil times in which we live and die, Knowledge Files are an invaluable resource on occultism and secret societies. Do you believe you have no need to inquire into the esoteric? Have you ever had a moment where gut instinct informs the mind there's more to it? The present writer experienced an "aha moment," when confronted with the juxtaposed images of Barbara Bush and Aleister Crowley. You just seem to know instinctively there's a connection. This was one such jolt to an otherwise somnambulant, mechanical life. The unwanted realization that the political classes of today are inhabitants of occult realms steeped in arcane practices of medieval times, was resisted by a hard shell of denial. The blindness represented more the brainwash of growing up and instant dismissal of anything that ran counter than a conscious decision. Once, strange events started to invade on a regular basis: Waco, TX, Oklahoma City bombing and Columbine School shooting taking place at the beginning of important spring occult dates, it became more difficult to ignore and doubts crept in. The influence of dark practices has only increased when the grandson of the Great Beast aka Crowley took office in 2001. A good reason to explore an alternative spiritual education, is, it's part of our world!

Crowley's "The Equinox - The Review of Scientific Illuminism," the official organ of Crowley's A.'.A.'., is a good place to start. The Great Beast remains a lasting influences on esotericism over a half century after his death. You should read, at least, an account of A.'.A.', the first chapter, for an overview. It's time to face reality that there are practitioners of darkness among us!