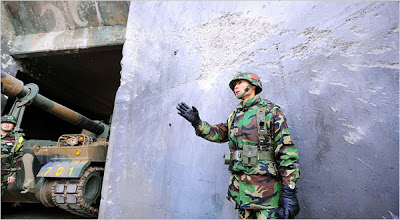 north korea attack may be response to drills

from danger room: It’s not the diplomacy-minded former president who is ready to spy, it’s the secretive nuclear submarine named for him. The surveillance and attack capabilities it’s supposed to have could keep the tense situation on the Korean peninsula from spiraling out of control. In the wake of yesterday’s North Korean artillery barrage against a South Korean island, the U.S.S. George Washington is sailing to South Korea to participate in joint exercises.

A statement from the Navy’s Seventh Fleet, which patrols the western Pacific, says the drill was planned before the “unprovoked” North Korean attack, but will demonstrate “the strength of the [South Korea]-U.S. Alliance and our commitment to regional stability through deterrence.” In other words: to stave off another attack, not to initiate a retaliation.

The George Washington aircraft carrier is equipped with 75 planes and around 6,000 sailors. But it’s not coming alone. It’s got the destroyers Lassen, Stethem and Fitzgerald with it, and the missile cruiser Cowpens in tow. Rumor also has it that the carrier strike group will link up with another asset in area: The undersea spy known as the Jimmy Carter, which can monitor and potentially thwart North Korean subs that might shadow the American-South Korea exercises.

According to plugged-in naval blogger Raymond Pritchett, word’s going around Navy circles that the first surveillance assets that the United States had in the air over yesterday’s Korean island battle were drones launched from the Jimmy Carter.