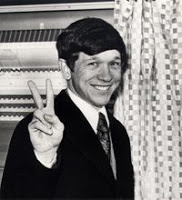 kucinich: ‘if bush attacks iran, all bets are off’

from raw story: While making an unannounced appearance at a media reform conference on Friday, Congressman Dennis Kucinich (D-OH) - a candidate for president in 2004 and already announced for 2008 - was pressed by bloggers in attendance about impeachment.

Telling the crowd that while he didn't think immediate action was wise, due to fears that Bush might "accelerate the war even more," the congressman warned that "if Bush attacks Iran, all bets are off."

At the Free Press National Conference on Media Reform in Memphis, Tennessee, Kucinich announced that he has been named chair of the newly-formed Domestic Policy Subcommittee of the House Oversight and Government Reform Committee, drawing cheers from the crowd. The subcommittee will have jurisdiction over all domestic agencies of the federal government, including the Federal Communications Commission.

"Kucinich, among Capitol Hill's most outspoken critics of President Bush and the war in Iraq, had been ranking member of the National Security Subcommittee in the last legislative session," Jessica Brady reported for CongressDaily. "As the panel's presumed chairman in the Democratic-led 110th Congress, he had a ready platform to advance his antiwar agenda."

But Kucinich told CongressDaily that he "might wield more influence" as chairman of the subcommittee and that House Oversight and Government Reform Chairman Henry Waxman (D-CA) "made clear that he's going to use the full committee" to address foreign policy issues. Kucinich added, "Domestic policy could end up having the most influence of any committee [because] it has oversight of all domestic policy in the US."