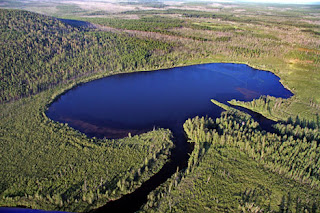 Luca Gasperini, leader of an Italian expedition, has researched 1908 Tunguska Blast in Siberia for over 20 years. Natallia Etorre and Vladimir Tikhominrov write an excellent article about the research and mixed response it's received in article, "Scientists uncover evidence in Siberia's century-old meteorite mystery." Gasperini shares his inspiration to undertake research in such a remote forbidding location, "'I have been fascinated by the Tunguska mystery since childhood and I have dreamed of discovering the meteorite all my life,' the Italian professor said. 'So, as soon as I had a chance, I put together a team of specialists and we went to Russia.'" The expedition from ISAR Institute for Marine Geology in Bologna, Italy has been coming to the Podkamennaya Tunguska River basin since 1991.

The article reports on alternative theories examined until:

"Soviet scientists in the 1960s focused on Lake Cheko, a body of water some 5 miles from the assumed ground zero with an unusually round shape. What if the lake were the original crater, which was later filled with water from the Kimchu River? Gasperini said he has no doubt that this version is what really happened."

The Italian researchers drilled holes on the lake's shore and found a totally different sedimentary layer below the surface. Wood chips and pollen hardly older than 100 years were discovered and first clue that Lake Cheko was formed recently. The lake also differed from other shallow glacier-formed lakes in the region by reaching depths of 165 ft.

It was then decided to follow tact of seeking references to Lake Cheko in old Russian archives. It was a long shot but they found records:

"'We thought: what if we could find a documentary record that there was no such lake before the event?' said Gasperini. 'Someone might think that impossible, but we pulled it off. We came across an 1883 map of the old Eniseisk province in one of the Krasnoyarsk archives, and there was no Lake Cheko on the map. There is no mention of the lake in letters, police reports or any other documents dating from the 19th century. Why? Possibly, they simply ignored it, but another possibility is that there was no lake in that spot at all.'"

A helicopter was brought in to take geomagnetic aerial photographs of Lake Cheko and found a magnetic disturbance in its center that researchers believe is their meteor. Russians remain skeptical until they see an actual meteor sample for themselves. A sample may be hard to obtain, since it would require an offshore drilling rig, to penetrate the lake bed that lies in a remote location. The present writer suspects Gasperini is on the right track and a tip of the hat goes to his amazing scientific passion!