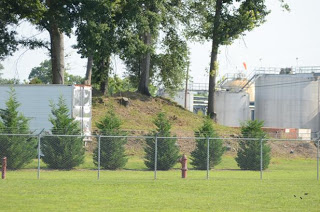 from timesfreepress.com: Finding evidence of American Indian remains on a business property is rarely cause for celebration for owners or developers, but it's not really very unusual in this region. Still, a few years ago when an Amnicola Highway food manufacturer learned the property he'd just bought contained one of Chattanooga's oldest Indian mounds, he was surprised. So Kenny Wilhoit listened intently to local American Indians when they called him, seeking a conservation easement on the mound. Then he did something very unusual -- he welcomed visitors to what they told him was a very sacred spot. "It means something to them, and it's not hurting me," said Wilhoit, president and owner of Atlantic Distributors Inc. on Amnicola. The story resonates for the tri-state region, which has thousands of mounds. Meg Lockhart, spokeswoman for the Division of Archaeology in the Tennessee Department of Environment and Conservation, said there are 900 mound sites recorded to date across Tennessee alone. Tom Kunesh, a Chattanoogan and member of the Advisory Council on Tennessee Indian Affairs, calls the Amnicola mound "the oldest thing in Chattanooga that humans made." And recently, Kunesh, two archaeologists from Nashville and a handful of other Chattanoogans interested in the region's earliest and American Indian history celebrated Sacred Sites Day at the mound on the summer equinox of June 20. In the ceremony, they honored Wilhoit, along with the ancestors buried there. "He's been great to work with," Kunesh said. "He's allowed us access, and we've been out maybe four times in the past year, cleaning it up. It's like cleaning up a cemetery." The new friends renamed the mound. What had been labeled 40HA66 in the state Division of Archaeology is now the Chickamauga Mound.