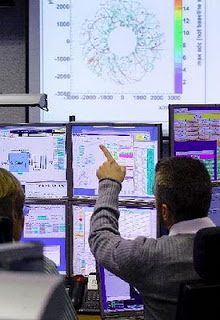 LHC particle-punisher in record 7tev hypercollisions
from theregister.co.uk: It's official: as this is written, the most powerful particle collisions ever achieved by the human race are taking place inside the great subterranean detector caverns of the Large Hadron Collider (LHC). An initial hiccup this morning saw an overly-jumpy automatic protection system quench a magnet and dump one of the beams, but boffins at the colossal 27-km machine's controls fought back to re-establish a ring of lightspeed 3.5 tera-electron-volt (TeV) protons in the affected magno-doughnut in time for lunch. 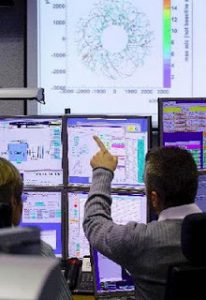 from telegraph: Dubbed the world's largest scientific experiment, the giant atom smasher holds the promise of revealing details about theoretical particles and microforces, scientists say. But initial attempts on Tuesday were unsuccessful because problems developed with the beams, said scientists working on the massive machine. That meant that the protons had to be "dumped" from the collider and new beams had to be injected. "It's a very complicated machine and we have ups and downs," said Michael Barnett of Lawrence Berkeley National Laboratory. "Right now we have a down." ... The European Organization for Nuclear Research, or CERN, is trying to use the powerful superconducting magnets to force the two beams to cross, creating collisions and showers of particles. They could have been successful immediately, but such huge machines can be so tricky to run that it could take days.