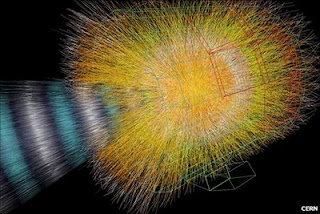 from bbc: Since 2009, the world's highest-energy particle accelerator has been smashing together protons, in a bid to shed light on the fundamental nature of matter. But now the huge machine will be colliding lead ions instead. The experiments are planned for early November and will run for four weeks.

The LHC is housed in a 27km-long tunnel on the Franco-Swiss border and is managed by the European Organization for Nuclear Research (Cern). The collider consists of four different experiments and one of them, ALICE, has been specifically designed to smash together lead ions.

The goal of these collisions is to investigate what the infant Universe looked like. Colliding protons at high energies was aimed at other aspects of physics, such as finding the elusive Higgs boson particlesupersymmetry and signs of new physical laws, such as a framework called.