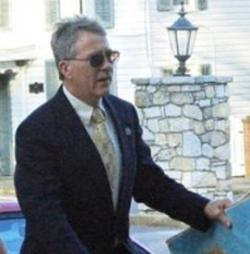 larry franklin was asked to ‘fake…suicide’ over aipac case

from politico: Two people asked a Pentagon official cooperating with prosecutors in an investigation into the American Israel Public Affairs Committee to fake his own death to avoid testifying against two pro-Israel lobbyists charged in the case, according to the Justice Department.

Pentagon analyst Lawrence Franklin pled guilty in October 2005 to participating in a conspiracy with AIPAC officials Steven Rosen and Keith Weissman to obtain and distribute classified information. The Justice Department dropped the case against Rosen and Weissman last month as a trial approached.

"Just prior to the entry of his guilty plea, Franklin was approached by two individuals who made a pitch to Franklin about faking his death by suicide and disappearing, thus thwarting any cooperation in the case against Rosen and Weissman," prosecutors wrote in a brief filed in connection with a motion to reduce the 12-year prison term Franklin was originally sentenced to.

"In January 2006, Franklin conducted five consensually recorded telephone conversations with one of these individuals, in support of an obstruction of justice/witness tampering investigation; however, the FBI was unable to obtain the requisite incriminating evidence to support a criminal investigation," the Justice Department brief said.

Lawyers for Franklin also cited his report of the apparent tampering effort as part of their arguments for reducing Franklin's sentence. The government recommended lowering Franklin's sentence to about nine years imprisonment. Franklin's team asked for probation. Judge T.S. Ellis, who imposed the first 12-year prison term several years ago, re-sentenced Franklin to probation and 10 months home confinement. (The Pentagon official never started his original sentence; he had been free pending Rosen and Weissman's trial.)

A lawyer for Weissman, Baruch Weiss, said today he knew nothing about the alleged incident. "If there was any witness tampering it wasn't by us. We had zero contact with Larry Franklin through all of this. That's true for us, our lawyers and anybody acting on our behalf. It’s totally surprising to me," Rosen said. An AIPAC spokesman also denied knowledge of or involvement in the alleged approach to Franklin.