‘Laser Rifle’ Is Latest US Weapon Against Enemies 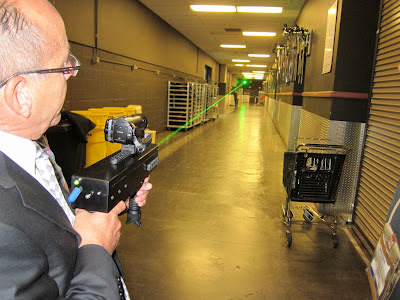 from smartplanet.com: Last month, a British defense company demonstrated how a non-lethal laser weapon can be used to ward off pirates. Now, American researchers have created a laser gun that sea bandits really wouldn’t want to mess with. While the crystalline Neodymium Yttrium Aluminium Garnet laser canon, developed by BAE Systems, can temporarily disorient an assailant with a pulse of blinding light, another prototype called the TR3 Threat Deterrent Laser Rifle is compact and the laser settings can be adjusted to inflict some serious pain... The TR3, developed by Xtreme Alternative Defense Systems and SPA Defense, can deliver a pretty intense 3-watt green laser at targets stationed up to one and a half miles away when operated at night. The rifle’s re-chargeable lithium-ion battery allows for up to 30 plus minutes of continuous firing. David Crane of DefenseReview.com got to test out a prototype during the recent Shooting, Hunting, Outdoor Trade Show and Conference or SHOT show... A company-produced video of the TR3 in action may exist and Crane plans to upload footage if he ever gets his hands on it. The TR3 is intended for military and defense markets only.