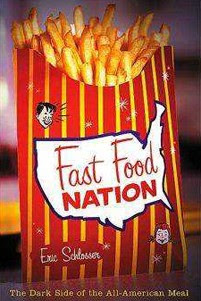 from thedailybeast.com: More than a decade has passed since Fast Food Nation was published, and I’d love to report that the book is out of date, that the many problems it describes have been solved, and that the Golden Arches are now the symbol of a fallen empire, like the pyramids at Giza. Sadly, that is not the case. Every day about 65 million people eat at a McDonald’s restaurant somewhere in the world, more than ever before. The annual revenues of America’s fast-food industry, adjusted for inflation, have risen by about 20 percent since 2001. The number of fast-food ads aimed at American children has greatly increased as well. The typical preschooler now sees about three fast-food ads on television every day. The typical teenager sees about five. The endless barrage of ads, toys, contests, and marketing gimmicks has fueled not only fast-food sales, but also a wide range of diet-related illnesses. About two thirds of the adults in the United States are obese or overweight. The obesity rate among preschoolers has doubled in the past 30 years. The rate among children aged 6 to 11 has tripled. And by some odd coincidence, the annual cost of the nation’s obesity epidemic—about $168 billion, as calculated by researchers at Emory University—is the same as the amount of money Americans spent on fast food in 2011.