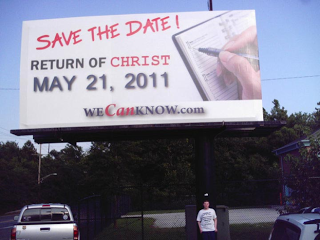 from beliefblog: Harold Camping, the leader of the apocalyptic movement that predicted the end of the world would begin on May 21, has suffered a stroke, according to a statement on his ministry's web site on Tuesday. Camping suffered a "mild stroke" last Thursday, according to the statement posted on the website of Family Radio, Camping's California-based broadcast ministry.

"Mr. Camping is receiving excellent care, and the doctors treating him are encouraged with the progress he is making," the statement said. "Mr. Camping's family appreciates everyone's thoughts and prayers."

“This was all we were told to tell everyone,” an operator at Family Radio said Monday, after she read the same statement that later appeared on Family Radio's website. The operator, who would not give her name, said she and Family Radio’s other operators came to work Monday morning to find the statement from the Camping family on their desks.

For months, Camping predicted that Jesus Christ would return to the earth on May 21 and that a select 2% to 3% of the world’s population would be raptured, or taken to heaven. Those left behind would face months of tribulation before perishing in the Earth's destruction, which Camping said would happen on October 21.

Camping, who is reported to be 89, spread the word through a national billboard campaign and caravans of RVs that toured the country spreading the doomsday message. When his prediction failed to pan out, Camping took the radio airwaves to say that he had misinterpreted the nature of the rapture but that the world would still end on October 21.

“We've always said October 21 was the day," Camping said. "The only thing we didn't understand was the spirituality of May 21. We're seeing this as a spiritual thing happening rather than a physical thing happening. The timing, the structure, the proofs, none of that has changed at all."

Camping founded Family Radio, a nonprofit Christian radio network with about 65 stations across the country, in 1958. It received $80 million in contributions between 2005 and 2009. He first inaccurately predicted the world would end in 1994. Despite his poor track record, he has gathered many followers. Some gave up their homes, entire life savings and jobs because they believed the world was ending.