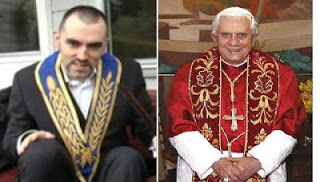 Henry Makow recently interviewed former 33rd degree Mason, Leo Zagami (picture, left), who still believes tribulation begins Dec. 21st, 2012. Zagami made prediction at the time he first rebeled in 2006.    "Leo stands by the predictions below. He says the world is entering a seven year period of 'tribulation'  which will include social unrest and turmoil, financial
upheaval and war in the Middle East. North America has been sheltered
but this will not last. He expects we will 'see the light' in 2019 but
he "doesn't know how many will survive," reports Makow.   Zagami descended from an ancient Illuminati family, predicts as many as 3/4 population will not survive the Tribulation. Perhaps, more interesting, Zagami believes Pope Benedict XVI (picture, right) is the Anti-Christ. You can find a readable article by a Baptist church for reasons to ask: "Is Pope Benedict XVI the Anit-Christ?" Makow makes it clear, Zagami wasn't just another Mason: "As an ex-member of the Comitato Esecutivo Massonico - Masonic Executive Committee (MEC) of Monte Carlo, Zagami was, until recently, a true insider, a 33rd degree Freemason, and a high-member of the infamous Freemasonic P2 (Propaganda Due) Lodge. He was the 'prince', prepared to take over from the older Illuminati "king", Licio Gelli." Has the Great Tribulation began?