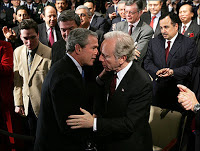 from reuters/alertnet: Sen. Joseph Lieberman said on Tuesday that Congress should consider a tax to fund the U.S.-declared war on terrorism and reduce the need to cut domestic programs to pay for security spending.

A former Democrat who supports the Iraq war and backs President George W. Bush's plan to send 21,500 additional troops to Iraq, Lieberman said the proposed increase in the Pentagon's budget for next fiscal year will squeeze funding for critical domestic programs.

"I think we have to start thinking about a war on terrorism tax," the independent Connecticut lawmaker said. "I mean people keep saying we're not asking a sacrifice of anybody but our military in this war and some civilians who are working on it."

"When you put together the (Pentagon) budget and the Homeland Security budgets, we need to ask people to help us in a way that they know when they pay more it will go for their security," he said during a Senate panel hearing on the defense budget request.

Bush on Monday asked Congress to approve $700 billion in new military spending and to curb many domestic programs. The request includes $245 billion for the Iraq and Afghanistan wars between now and late 2008.

If Congress approves the war funding, the United States will have spent $661.9 billion on combat in Iraq, Afghanistan and related activities.

Increased defense spending since 2001 has come amid tax cuts that the Bush administration says were critical to keeping the U.S. economy strong after the Sept. 11 attacks.