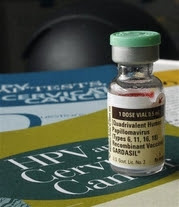 Perry also directed state health authorities to make the vaccine available free to girls 9 to 18 who are uninsured or whose insurance does not cover vaccines. In addition, he ordered that Medicaid offer Gardasil to women ages 19 to 21...

Merck [which makes the vaccine] is bankrolling efforts to pass state laws across the country mandating Gardasil for girls as young as 11 or 12. It doubled its lobbying budget in Texas and has funneled money through Women in Government, an advocacy group made up of female state legislators around the country.

The governor also received $6,000 from Merck's political action committee during his re-election campaign.

The order is effective until Perry or a successor changes it, and the Legislature has no authority to repeal it, said Perry spokeswoman Krista Moody. Moody said the Texas Constitution permits the governor, as head of the executive branch, to order other members of the executive branch to adopt rules like this one.