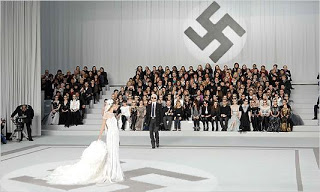 chanel & the nazis: what the films won't tell you

from times online: Why is Coco Chanel getting a free pass on her collaboration with the Nazis? Her past was deeply compromised... As we gear up for cultural Chanel-mania this summer with two hagiographic films about the designer, a new biography and the sound of slavering from glossy magazines, it is worth pausing to investigate Coco Chanel's wholesale - and retail - involvement with the Nazis. The world's greatest fashionista may have rescued women from the corset, but she did not have a good war. When shoppers swoon over the iconic quilted handbag with the CC logo, most are unaware that Chanel once went to Berlin to plot with Walter Schellenberg, who wore his Waffen SS logo as Hitler's chief of foreign intelligence. Perhaps Chanel-lovers also have no idea that she tried to wrest control of her perfume manufacturing from a Jewish family, taking advantage of pro-Aryan laws. Or that she was arrested for war crimes - and then mysteriously released. 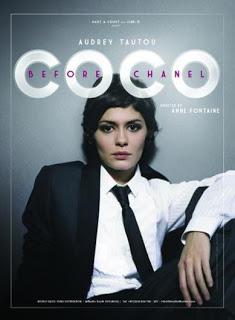 Previously, I'd seen it mentioned that Chanel had survived the war rather comfortably at the Paris Ritz in the arms of a Nazi officer, Hans Gunther von Dincklage, and then gone into exile in Switzerland with him, but a few hours spent in the library revealed that she was far more deeply involved with the Germans than that. There was even a (somewhat ridiculous) Nazi plot, using Chanel as bait, called “Operation Modelhut”. None of this will be discussed, of course, in two upcoming biographical films: Coco Avant Chanel, starring Audrey Tautou, and Coco Chanel and Igor Stravinsky, with Anna Mouglalis, about Chanel's relationship with the Russian composer. Nor was it detailed in a Chanel television mini-series with Shirley MacLaine last year, or in the 1981 film Chanel Solitaire. With commercial good sense, all films avoid the German invasion of Paris and Chanel's collaboration. It's a case of “Don't Mention The War!”

hitler's painting of black cat to be auctioned

from telegraph: The piece depicts a black cat sitting up on its haunches, looking upwards, and bears the fascist leader's initial's – A.H. It is one of an array of 13 watercolours which were recently found, forgotten in a collector's garage. They are early examples of Hitler's work and were painted during his twenties, when he was a struggling artist. The pieces are expected to attract great interest and could fetch thousands of pounds at auction on April 23. 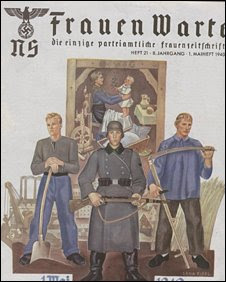 from bbc: A collection of the official women's magazine of the Nazis could fetch up to £700 when it goes up for sale at an auction next week. The magazine, called NS Frauen Warte, aimed at the German housewife during World War II, gives recipes, knitting patterns and other household tips. Several of the magazines will feature in a lot being put up for sale by Shropshire auctioneers Mullock's. Experts said the collection could fetch between £500 and £700. Richard Westwood-Brookes, from Mullock's, said it was "everything you'd expect a woman's magazine to have and more... [You see] nice articles about what women are doing in their groups and things like that... Then you turn the page and then you find there [a] banner-waving Nazi soldier with a big headline saying 'would you have your daughter marry a Jewish man?'" It was a fortnightly publication and ran from 1935 to 1945, Mr Westwood-Brookes added. He said the publication's idea was to provide a "subtle stream of propaganda information to women". Mullock's also has a collection of boys' magazines from the 1930s, which are "fairly unsubtle" and include "lots of battle scenes", Mr Westwood-Brookes said. He expects those to make about £200. Mr Westwood-Brookes said: "The way in which the propaganda machine worked, it went to everybody right the way down to almost babes in arms."