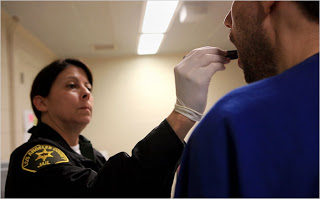 from nytimes: Law enforcement officials are vastly expanding their collection of DNA to include millions more people who have been arrested or detained but not yet convicted. The move, intended to help solve more crimes, is raising concerns about the privacy of petty offenders and people who are presumed innocent.

Until now, the federal government genetically tracked only convicts. But starting this month, the Federal Bureau of Investigation will join 15 states that collect DNA samples from those awaiting trial and will collect DNA from detained immigrants — the vanguard of a growing class of genetic registrants.

Law enforcement officials say that expanding the DNA databanks to include legally innocent people will help solve more violent crimes. They point out that DNA has helped convict thousands of criminals and has exonerated more than 200 wrongfully convicted people.

But criminal justice experts cite Fourth Amendment privacy concerns and worry that the nation is becoming a genetic surveillance society.

“DNA databases were built initially to deal with violent sexual crimes and homicides — a very limited number of crimes,” said Harry Levine, a professor of sociology at City University of New York who studies policing trends. “Over time more and more crimes of decreasing severity have been added to the database. Cops and prosecutors like it because it gives everybody more information and creates a new suspect pool.”