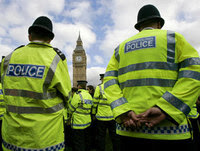 london braces for attack, ‘miracle’ if there isn’t one

British police have been quietly carrying out a series of key arrests as they continue to track at least six active "plots" tied to what they call "al Qaeda of England."

Officials said they could not cite any specific date or target but said al Qaeda had planned previous operations during the Christmas holidays that had been disrupted.

"It is not a matter of if there will be an attack, but how bad the attack will be," an intelligence official told ABCNews.com.

Authorities say they are seeking at least 18 suspected suicide bombers.

"They hope they are one step ahead, but they seriously fear they may be one step behind," the senior American official said.

British law enforcement and intelligence officials say the ongoing plots have been in the planning stages for at least three years. The officials say the plots are all connected and track back to al Qaeda commanders in Pakistan who have been recruiting and training British citizens of Pakistan descent.

A report by "Newsweek" says that American al Qaeda figure Adam Gadahn has served as a translator of a 12-member team of Western recruits, the "English brothers," said to be preparing an attack that would be much bigger than last year's attack on the London subway system.

U.S. officials say the "Newsweek" report is, in many respects, parallel to intelligence reports they have been receiving.

British Home Minister John Reid recently told reporters that it was "highly likely" that terrorists would attempt an attack before the first of the year.