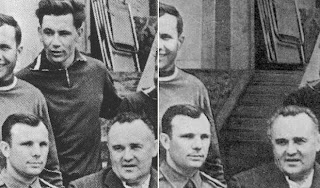 Grigoriy Nelyubov's disappearance from the photo (pictured), and similar strokes, brought suspicion on the Soviet space program. The mysterious deletions also stoked curiosity about the ultimate fates of these airbrushed souls! Nelyubov, a 1963 drunken brawl dismissed him from the program and banishment to Siberia, is referred to as a "suicide by train" in 1966 by most historical accounts. James Oberg, a US gatekeeper, provides details on some airbrushed ex-personages in this Wired Science article, "Soviet Space Propaganda: Doctored Cosmonaut Photos". Oberg's take on dead cosmonauts is in his 1988 book, "Uncovering Soviet Disasters". Chapter 10 gives readers an idea of the layers of deception and disinformation. Valentin Bondarenko, a young cosmonaut, is one of the first deceptions by deletion. Oberg's recap of cosmonaut Georgiy Shonin's 1977 book, "The Very First Ones," where readers are first fed "...the existence of eight 'dropouts'...clearly indicating that all eight had left the program alive".

The tragic reality runs counter to a "lived happily ever after" tale with grim accounts at "The Lost Cosmonauts website". A desperate woman's plea in Russian in a recording on YouTube, is perhaps, the most compelling! It sounds, certainly, like a cosmonaut and as observed by their sister, "it doesn't sound like a tea party," in a fine film on the Judica Cordiglia brothers, "Space Hackers," who recorded the communications. The brothers were sophisticated and stand accused of hoaxing. A retelling of events at the dawn of the space age still make a fascinating story--great stuff!