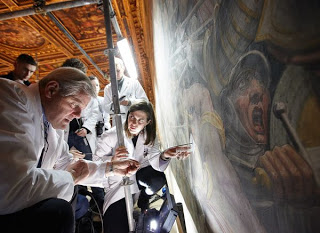 from NationalGeographic: By poking high-tech instruments through the wall of one priceless 16th-century mural in Italy, researchers announced Monday that they think they've located the first "encouraging" evidence that a second masterpiece—this one a lost Leonardo da Vinci—is hidden beneath.

Using a tiny camera, the researchers snapped pictures of a telltale hollow space behind Giorgio Vasari's "Battle of Marciano"—and a brick wall—in the Hall of the 500 in the Palazzo Vecchio, Florence's city hall. (Video: 360-degree laser scan of the Hall of 500.) They also uncovered black pigment and lacquer used in painting—clues that the lost Leonardo may have long ago been saved from destruction. The findings are inconclusive for now—the Leonardo da Vinci investigation was interrupted by political and public outcry—but they're the first tantalizing leads in a mystery that spans more than four centuries.

Peter Siddons, a physicist at Brookhaven National Laboratory who has verified famous works of art (including a painting by Rembrandt) with particle accelerators, said it seems pretty clear something is behind the Vasari mural. "There doesn't seem to be enough details out there yet, but based on what has been shared so far, I believe there is a painting. They found paint and they found brushstrokes," Siddons said. "To jump and say it's a Leonardo da Vinci? That's another question. Still, someone took the trouble to build this false wall," he said. "I certainly think that's intriguing."