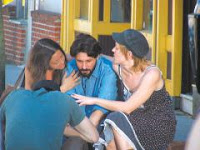 from ap: A new documentary about Charles Manson may feature a scene shot in a section of Martinsburg that looks a lot like San Francisco. Pamela Haynes, director of the West Virginia Film Office, says producers provided reference photos of the Haight-Ashbury district, where Manson spent time in the 1960s.

She says it was the spitting image of North Queen Street, where a film crew worked Monday. Sirens Media is producing the film for MSNBC. Faith Gaskins, the re-creation producer, says other scenes have been shot in Jessup and Silver Spring, Md.

The untitled film is expected to air next year, the 40th anniversary of the murders of actress Sharon Tate and six other people by Manson followers. Manson is played by Charlie Davidson, an actor from Silver Spring. 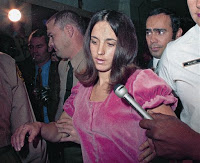 from ap: Nearly 40 years ago, Susan Atkins was a leading character in one of the most horrific chapters in California history. On Tuesday, the former follower of Charles Manson sought to end her story on her own terms: by being allowed to go home. The state parole board denied that request.

Atkins, convicted in the slayings of actress Sharon Tate and others in 1969, is dying of brain cancer and asked that she be granted compassionate release from prison. She wants to spend her final months surrounded by family and friends, not prison guards. "Susan has served a life sentence," Virginia Seals, Atkins' sister-in-law, said in arguing that the state's longest-serving female inmate be freed. "This is about her death."

In a unanimous decision, the California Board of Parole Hearings denied the request Tuesday. Her lawyer said he has filed a separate motion in Los Angeles County Superior Court seeking his client's release, anyway.