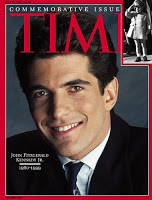 on this day: jfk jr dies in plane crash

from finding dulcinea: At 9:30 pm, the Piper Saratoga floated through fog over the Atlantic Ocean, flying from New Jersey to Cape Cod. John F. Kennedy Jr. sat in the pilot’s seat beside his wife, Carolyn, and sister-in-law, Lauren. Kennedy, a new pilot, planned to drop Carolyn off in Martha’s Vineyard and then continue to Hyannis Port, where his cousin, Rory, was getting married. Suddenly, the plane fell off the radar, plummeting 14,000 feet in 14 seconds and crashing into the water just off Martha’s Vineyard. U.S. Coast Guard officials immediately began a rescue search, and in the days that followed, the air force, navy, and civilians scoured the waters in hopes of saving the trio.

The crash, which occurred just 17 months after Kennedy’s cousin, Michael, died in a skiing accident, was one in a series of tragedies that has shaken the Kennedys. A horrified nation watched as Kennedy’s father, President John F. Kennedy, was assassinated in 1963, followed only five years later by the shooting of President Kennedy’s younger brother, Robert.

Luggage from the crash wreckage surfaced on July 17. As days passed, Americans began to lose hope that any passengers would be found alive. On July 21, divers recovered the three bodies eight miles offshore. Officials reported that the crash was the result of Kennedy’s inexperience as a pilot combined with low-visibility conditions on the night of July 16th. A memorial ceremony for the three was held on July 22, where their remains were scattered at sea from a navy destroyer, the USS Briscoe.

from what really happened: As first reported by United Press International, John F. Kennedy Jr. on approach to Martha's Vineyard in 8 mile visibility, was in radio contact with the ground, calmly informing them of his intentions to drop off a passenger before proceeding to Hyannis airport. Then, according to ABC News, JFK Jr's plane went into a steep dive, and crashed.

However, even before the wreckage was found, the story being put out in the media began to change. Gone was the previously reported radio conversation a calm JFK Jr. had with ground personnel just before the plane fell out of the sky, replaced by a declaration from the NTSB that JFK Jr. had not used his radio at all as he approached Martha's Vineyard. Gone also was the originally reported 8 mile visibility while the media began to hammer home the claim that Martha's Vineyard had been totally blanketed with a haze so heavy that pilots in the air would have been blind.

No sooner were the various stories put out but they quickly fell apart.