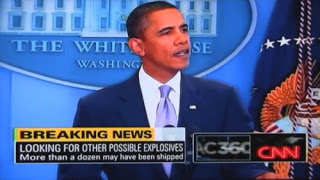 from kurt nimmo: Once again, according to the government and the compliant corporate media, Muslim cave dwellers are attempting to kill us because they hate our freedom.

Last week the airwaves and internet were besieged with a fabulous story of al-Qaeda miscreants in Yemen attempting to send toner cartridge bombs to synagogues in Chicago.

“The packages from Yemen contained chemical explosives camouflaged as printer cartridges and wired to be detonated by a cell phone, and were found in Dubai and England on Friday only after the U.S. received a tip from Saudi Arabia,” reported the Los Angeles Times.

In response, bureaucrats said we’ll have to get used to more obtrusive airport “pat-downs” and screening of incoming foreign parcels using a network of government-certified private screeners and companies as well as its own inspectors at about 18 gateway airports around the country, according to the Transportation Security Administration. Terror is a growth industry, undoubtedly.

But wait a minute. There is a problem with all of this and, as usual, the government has not done a very good job of making the latest al-CIA-duh plot credible, at least not for people who bother to pay attention.

According to Mohammed al-Shaibah, Air Cargo Director for Yemenia Airways, “there is no evidence to prove that this package came through Yemen.” He said there were no UPS or DHL cargo flights from Yemen within a 48 hour period prior to the supposed terror attack.

Naturally, a news search using the term Mohammed al-Shaibah produces no results from the New York Times, the Washington Post, or the rest of the corporate Mockingbird media.

Never mind. Nothing to see here. Please move along.

remember: you're more likely to die by cop than terror