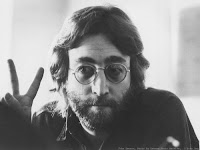 Phil Strongman writes a new book, "John Lennon--Life, Times and Assassination" and revisits agency involvement in the murder.  The most convincing argument is to follow the money.  "Money never seemed to be a problem for Chapman, but no one has ever explained where it came from. The distinct possibility remains, in Strongman’s opinion, that the secret service was his paymaster."  A young man without visible means, Chapman was able to travel around the world to Japan, the UK, India, Nepal, Korea, Vietnam and China in 1975.

The portrayed of the 25 year old as a "lone nut" has fallen away as more facts have become known.  Strongman believes more than one shooter had to be involved, it's often cited the number of bullets add up to more than one gun.  The author harbors doubts whether Chapman fired at all?  Outside doorman Jose Perdomo's involvement in the Bay of Pigs, revealed in recent years seems a strong possibility as a participant?

Mark David Chapman, as a Manchurian Candidate or programmed assassin, is not new however. "Who Killed John Lennon" written by Fenton Bresler, twenty years ago, did an admirable job revealing the mind control aspects of the murder. The unaccounted for layover by Chapman at Chicago O'Hare airport just prior to Lennon's shooting leaves open possibilities.  Bresler suspected that time was used to reassert control over Chapman's mind as he was acting erratically?  Strongman concludes Chapman was likely a stooge and Lennon was assassinated at the behest of right wing fanatics in the political establishment.  Phil Spector feels John Lennon's assassination "was certainly a probability" in very brief interview excerpt on You Tube.