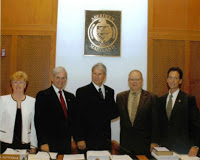 from baltimore sun: Hoping to deter crime by expanding the use of surveillance cameras, Aberdeen passed a measure that empowers the city government and police to require cameras in new developments.

The City Council passed the measure, which becomes effective next week, by a 4-1 vote.

Cameras installed at new developments will be connected to a watch room at the police station, Mayor S. Fred Simmons said.

Simmons said the police chief will work with the other departments to study the feasibility of installation and check whether a camera is "wanted and necessary" at new developments.

But the ordinance does not spell out guidelines for determining whether a new development will be required to have cameras, which concerned the lone dissenter on the council vote, Ruth Elliott.

"We have no internal procedures or policies on this," Elliott said. "It is vague, and you can read in between the lines."

Though crime is decreasing in Aberdeen, the city is seeking to prevent crime by expanding the camera program, Simmons said.

as an interesting side note, aberdeen is also the home of the edgewood arsenal