US to launch $1bn ‘plan mexico’

from financial times: The US intends to supply Mexico with a $1bn aid package to help combat an increasingly costly and violent war against drugs, according to a top Mexican diplomat.

The agreement, which some experts have dubbed ”Plan Mexico” after the controversial multi-billion-dollar anti-narcotics package the US established with Colombia in 2000, would be spread out over two years and include the supply of intelligence, training and equipment such as helicopters and boats.

However, Carlos Rico, Mexico’s undersecretary for North American affairs, said the plan would not resemble the aid package with Colombia. In particular, he said, no US troops would be allowed to operate on Mexican soil, thus sidestepping the particularly sensitive issue of Mexican sovereignty.

”They talk about Plan Colombia,” Mr Rico said. ”Here, we have the operational capacity to do it ourselves.”

Mr Rico’s comments confirm rumours that have been circling for several months. An official joint announcement is expected in the coming days.

The programme, which will be called the Joint Strategy to Fight Organised Crime and which requires approval by Congress before it can be rolled out next year, will probably be seen as a significant victory for Felipe Calderón, Mexico’s centre-right president…

So far, that strategy appears to have achieved mixed results. Last week, Mexico’s army seized 10 tonnes of cocaine in the northern state of Tamaulipas in the biggest drugs haul in the country’s history.

and who was telling you this two months ago?
that’s right, the council on foreign relations & the washington post…

inklings of a ‘plan mexico’ 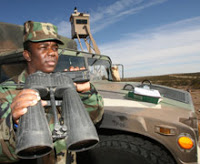 from cfr.org: While Congress debates the renewal of Plan Colombia, a counternarcotics package that has cost $5 billion since 2000, the Bush administration and the Mexican government have been quietly negotiating their own drug-fighting partnership.

Dubbed “Plan Mexico” by some, the agreement could be announced as soon as August 20, when President Bush and Mexican President Felipe Calderon meet with Canadian Prime Minister Stephen Harper in Quebec. The United States currently gives about $40 million in antidrug assistance to Mexico.

Details of the proposed plan are scant, but it is expected to involve hundreds of millions of dollars in aid. U.S. and Mexican law-enforcement agencies have long been suspicious of one another, and such a large agreement would represent an unprecedented partnership for both parties.