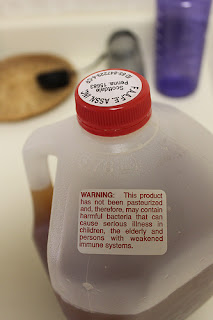 from barfblog: In October, 1996, 16-month-old Anna Gimmestad of Denver drank Smoothie juice manufactured by Odwalla Inc. of Half Moon Bay, Calif. She died several weeks later; 64 others became ill in several western U.S. states and British Columbia after drinking the same juices, which contained unpasteurized apple cider –and E. coli O157:H7. Investigators believe that some of the apples used to make the cider may have been insufficiently washed after falling to the ground and coming into contact with deer feces… Yesterday, Baugher’s Orchard and Farm in Westminster, Maryland, announced to local fanfare – and some customer distress – that it will change the way it produces apple cider in the future after E. coli infections were linked to the product this fall.