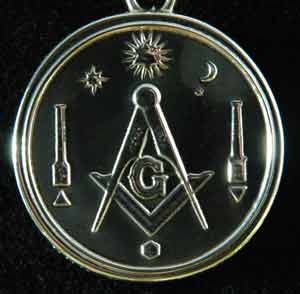 What is the meaning behind Masonic Compass & Square with a "G" in the middle?  A link to page with heading "Alchemical Symbols" supplies an explanation:

"Perhaps the best-known of all Masonic symbols are the compass and square, shown interlocked with the letter "G" between them, as the traditional emblems of Freemasonry. During the granting of the First, Second and Third Degrees, the compass and square are placed upon the altar of the Temple in an interlinked fashion, representing the divine Light as it unites with the candidate and fills him with increasing knowledge. At the same time, this leads to his 'rebirth' as its resurrected 'offspring'.  That this symbolic rite was derived from a still older mystery, however, is suggested by an early Masonic catechism, which asks, What did the 2 cherubim on the ark of the covenant represent?"

"The letter 'G' (signifying God's secret Name) appears between the intertwining compass and square and is paralleled by Philo's explanation [Philo of Alexandria] that the union of the statues in the Jewish Temple represented God's 'consorting' with the soul, and his 'divinizing' of the recipient. Thus the compass and square are exact symbolic equivalents of the ancient Cherubim, i.e. the ancient 'Male' and 'Female,' whose union was the central feature of the Wisdom mystery, and which brought about the candidate's deification. But we should also compare this unique symbolism with the Divine Image itself (Gen. 1:27), which teaches that God is male and female united; hence the sacred 'G' appears only when the male compass and the female square are intertwined."

This completes your course in Masonic Symbols 101:  Compass & Square.