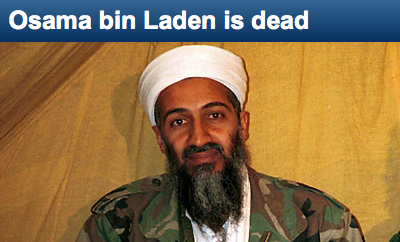 from cnn: The mastermind of the worst terrorist attack on American soil is dead, U.S. President Barack Obama announced late Sunday night, almost 10 years after the attacks that killed almost 3,000 people. Osama bin Laden -- the longtime leader of al Qaeda -- was killed by U.S. forces in a mansion outside the Pakistani capital of Islamabad along with other family members, a senior U.S. official told CNN. In an address to the nation late Sunday night, Obama called bin Laden's death "the most significant achievement to date in our nation's effort to defeat al Qaeda."

kicking the corpse one last time:
the alleged death of osama bin laden

from clyde lewis: Osama bin laden, one of the C.I.A’s greatest assets has finally been reported dead, a convenient distraction from the firestorm of controversy about Barack Obama’s birth certificate. It is also very suspicious since his death has been announced on the eight anniversary of the Mission Accomplished speech by George W. Bush.

Ground zero reported at its Ground zero Lounge that Osama Bin Laden has been reported dead since 2006 internationally. Ground zero also was reporting that in Al-Jazeera interview with David Frost Benazir Bhutto reported that Bin Laden had been killed.

In a November 2, 2007 interview, less than two months before she would be assassinated, Benazir Bhutto was asked by reporter David Frost of Al-Jazeera English about a letter that she had sent to Pakistani dictator Pervez Musharraf. The letter outlined who she believed should be investigated in the event of her assassination. While giving her answer, she listed as one of the suspects a “key figure in security… a former military officer in Pakistan” who had dealings with, among others, “Omar Sheikh, the man who murdered Osama bin-Laden.”

He was also a blowback form the era of “Operation Cyclone” where the U.S. government embraced the terrorist acts of Bin laden in order to bring down Soviet Communism.

It was reported on Ground Zero in 2001 that the circumstances for the revelation of Bin Laden’s death would come at a time when the government feels that his elusiveness is becoming unbearably embarrassing to the country and when the President of the United States will be facing a scandal that would destroy the executive branch of Government. It was also further noted that in 2003 Ground Zero reported that Bin Laden would have to be caught or killed at a time where the C.I A. would develop a military arm that would hire mercenaries to plan his execution and maintain ownership of his remains, or remains that appear to be Bin Laden’s and not the real remains.

It seems that much of what we could see and reported is literally transpiring now.

We will have a full report on these events and give you the real story behind what is happening this Monday on Ground Zero.