McDonald’s Force Olympics To Only Serve Chips With Fish 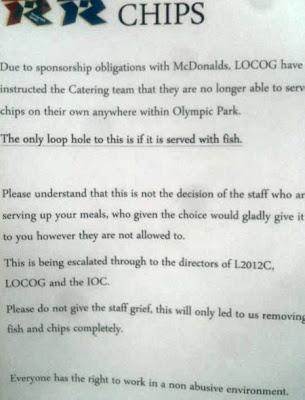 from dailymail.co.uk: Hundreds of food outlets at Olympic venues have been forced to take chips off the menu, because of a demand from sponsor McDonald's. Olympic chiefs have banned all 800 food retailers at the 40 Games venues across Britain from dishing up chips because of 'sponsorship obligations.' The only loophole in the agreement, announced in a memo to staff, is that chips can be served with fish - safeguarding Britain's most famous dish. But is seems the bosses have predicted an outrage about the decision, emphasising that the move was not backed by the food retailers. The memo reads:

'Due to sponsorship obligations with McDonalds, Locog have instructed the catering team they are no longer allowed to serve chips on their own anywhere within the Olympic park. The only loophole to this is if it is served with fish. Please understand this is not the decision of the staff serving up your meals, who given the choice would gladly give it you however they are not allowed to. This is being escalated through to the directors of L2012C and Locog and the IOC. Please do not give the staff grief; this will only lead to us removing fish and chips completely. Everyone has a right to work in a none abusive environment.'

Commercial partners Coca-Cola, McDonald’s, Cadbury, Nature Valley and Heineken will be the only branded products sold at the games.