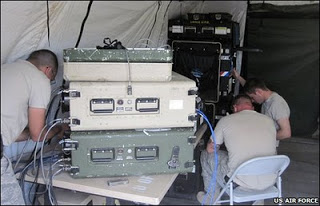 Meet US Cybercom: Why The US Is Fielding A Cyber Army 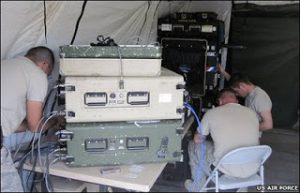 from bbc: The US is in the process of creating a unified cyber command, to fight the wars of the future. The Pentagon has no doubt that the next conventional war will include a cyber element.

Looking out of a window in London's Canary Wharf, Daniel Kuehl gestures randomly towards a high-rise. "Let's just assume that somewhere in that building there are a bunch of cyber systems, networks, routers, that are militarily important to take out," he said. "Which would you think would be the better way of doing it in terms of this neighbourhood? To make it stop working through a bunch of key strokes or to put a laser-guided, 1,000-lb weapon through the third floor and blow it to shreds? We're really good at that second operation - but there might be some advantages to doing it the first way."

The Pentagon is creating its first fully fledged cyber command - USCybercom - to improve its ability to wage war with key strokes...

Not everyone is convinced of USCybercom's military value. One US official at the London conference said that if cyber warfare was a WMD it was only a weapon of "mass disruption, not destruction".

But the US Senate is expected to confirm Lt Gen Keith Alexander, who also heads the US National Security Agency (NSA), as head of USCybercom in the near future.

If this happens, he will rise to the rank of a four-star general, and his new command will get its badge and take its place in the military.

"Believe me, creating an organisation led by an officer of that rank is not easy," says Daniel Kuehl. "It's not simple and it's not done unless there are perceived to be very, very pressing reasons for doing so. We are deadly serious about this."