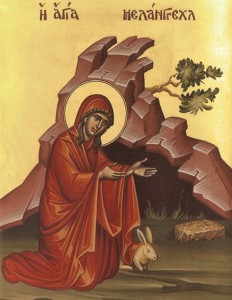 from blog.prehistoricshamanism.com: Mike Williams, Ph. D. We are all probably familiar with Eostre, the Anglo-Saxon Goddess who gave her name to Easter and is often associated with hares – the original Easter bunnies. But today in Wales, we celebrate the feast day a 6th century saint, Melangell, who is the actual patron saint of hares and may be the true inspiration behind those cute Easter bunnies.

Melangell was the beautiful daughter of an Irish king, who determined that she should marry a nobleman of the court to further his royal and political alliances. Not surprisingly, Melangell was less than impressed. In fact, so opposed was she to the wedding that she fled her home and crossed the sea to Wales. Being a fugitive, Melangell moved inland to a secluded valley, now close to the modern village of Llangynog, in my home county of Powys. Here, Melangell lived for 15 years without ever laying her eyes on another man. Back in Ireland, even if her father and her betrothed ever did look for her, they never saw Melangell again. Presumably, the nobleman married another and, one hopes, the king regretted his impetuousness.


After 15 years living as a hermit, one bright spring day, Melangell heard the sound of a hunt in full flight. Unbeknown to her, it was Prince Brochwel Ysgrithrog of Powys, hunting hares with his entourage and a pack of hounds. Melangell froze in fear but then looked down at her feet to see a hare cowering by her side. Quickly, Melangell took the terrified creature and tucked it into the folds of her dress. Tradition determines that a virgin’s sanctity will overcome any threat and the hare had cleverly sought out the maiden’s help to avoid its inevitable death at the teeth of the hounds.

Melangell acted just in time, as Prince Brochwel and his party were almost upon their quarry and had to pull up short to avoid crushing Melangell under the horses’ hooves.

The hare peeped out from the folds of Melangell’s cloak and was spotted by the hound master. He urged on the dogs for the kill but they remained rooted to the spot. The hound master then took his hunting horn, intending to blow the sound for attack, but the instrument stuck to his lips and not a sound emerged.

It is not written how long this standoff lasted but, at last, Prince Brochwel, deeply moved by both the beauty and courage of the maiden before him, got down from his horse and called off the hunt. He questioned Melangell about her origins but she remained mute. Finally, realising she contained the sacredness of God within her, Prince Brochwel offered Melangell all the lands in the valley for her to build an abbey. This Melangell did and she remained as prioress of the abbey until her death on 27th May, 590 AD.

Nothing survives of Melangell’s abbey but a surviving church nearby is dedicated in her name: St Melangell’s Church in Pennant Melangell. Interestingly, the ground upon which the church stands is both a Bronze Age burial site, and is also ringed with yew trees, all dating to before the Christian era. Perhaps this was even a meeting place of Iron Age Druids who were said to gather in groves. Inside the church is a shrine to Melangell, said to date to the 12th century and therefore the earliest Romanesque shrine in Britain. Her body is believed to lie beneath the structure. Since that time, hunting hares in the parish has been banned and nobody local would ever knowingly hurt Melangell’s patron animal. In the immediate area, hares are known as Oen Melangell, or Melangell’s lambs.

Interestingly, in Celtic tradition there are stories of (usually female) witches turning themselves into hares, and we are reminded of the words of the charm used by Scottish witch, Isobel Gowdie:

I shall go into a hare,

With sorrow and sych and meickle care;

And I shall go in the Devil’s name,

Ay while I come home again.

Could this verse relate in some way to Melangell, who sheltered the hare beneath her own clothes and became its patron? A Pagan origin for a Christian saint? If so, it reveals a shadowy tradition linking women with hares that has survived through the ages in the figure of St Melangell. Perhaps her story even gives rise to Easter bunnies, a sanitised form of the wild hares she knew. Either way, she is a saint to be proud of and I shall be lighting a candle to her memory later today.