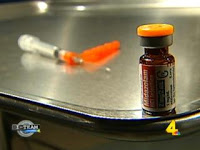 memphis cops use ‘amnesia’ shot in lieu of taser

from wsmv: While the Metro police had banned the use of Tasers for a time, they still used a controversial method to subdue unruly people, according to an I-Team report. The city's policy to use the method, which calls for the injection of a drug into a person, came as a "total surprise" to people most would expect to know all about it.

For almost two years, Metro police have had the option of calling for a needle loaded with a strong sedative to control the most unruly people they encounter on the street...

The drug is called Midazolam, which is better known as Versed. People who have had a colonoscopy have probably had a shot of the drug for the procedure.

"The drug has an amnesia effect, and we use that therapeutically because one of the nice ways to take care of the discomfort is to make people forget that they've had it," said biomedical ethics and law enforcement expert Dr. Steven Miles.