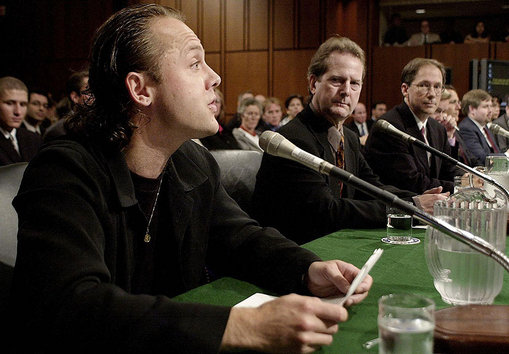 ...and the fight between Tech and Media has continued ever since.

from theverge.com: April 13th, 2000. The day the music industry and the internet became best frenemies forever.

The internet upended the media industry, and it's still trying to recover. Metallica v. Napster was just the first attempt.

A very short history: in 1999, a kid named Shawn Fanning created a
very simple peer-to-peer music sharing application called Napster. It
was essentially just a glorified file browser; the barebones interface
showed you MP3 files on various computers connected to the service and
allowed you to download them. By default, your files were shared in
return.

This, of course, was illegal. You can't distribute copyrighted
recordings, even if teenagers and music nerds have been making tapes and
mixes forever. The difference was in scale; while handing out a few
mixtapes to friends resulted mostly in the industry stamping "HOME
TAPING IS KILLING MUSIC" on the backs of cassettes, Napster posed a very
real existential threat: if everyone was getting and sharing music for
free, no one would ever buy it.

And for a band like Metallica, there were even worse repercussions: a leaked recording of the track "I Disappear" from the Mission: Impossible 2
soundtrack made its way onto Napster, and then onto the radio before
its official release. This so incensed the band that it filed suit
against the fledgling company, and drummer Lars Ulrich became an
outspoken defender of artists facing the disruption of free internet
distribution.

"Napster hijacked our music without asking," Ulrich told Congress in July 2000. "They never sought our permission. Our catalog of music simply became available for free downloads on the Napster system."

Ulrich had a point, of course — but going up against millions of
college students who had fallen in love with Napster wasn't an easy
fight. He was pitted against the cherubic-looking Fanning in every
argument, the millionaire metalhead drummer against the nerdy upstart
kid, and Metallica's image went from counterculture outsiders to
boardroom power players almost overnight.

Napster lost, of course. It was always going to lose, even if the
legal demands levied by Metallica and the RIAA were so onerous as to be
impossible. (One hundred percent copyright filtering accuracy? Good
luck.) In March 2001, Judge Marilyn Hall Patel ordered a preliminary injunction
forcing Napster to filter music, and in July of that year a proposed
settlement was thrown out because Napster's CEO used to work for the
music industry, tainting the deal.
Napster went bankrupt, and now it's gone forever, absorbed into
Rhapsody after a series of deals. (If you want to know more about this, the excellent documentary Downloaded is on Netflix right now.)

But while Napster flamed out in just two short years, the media /
internet debate has relentlessly burned on ever since: Sony wanting a
cut of Apple's iPod sales in addition to its iTunes revenue. The fight
over music DRM, eventually won by Jobs himself, even while video DRM
still lives on.

Pandora wanting different rates than regular radio
stations. YouTube building an empire on pirated video clips, getting
sued by Viacom, and then revealing Viacom itself had been uploading many
of those clips. The years-long march to Spotify launching in the United
States. SOPA. PIPA. Artists turning their backs on Spotify to drop full
albums exclusively on rival platforms like iTunes and Tidal. Apple
buying Beats and negotiating for music exclusives, just like it did a
decade ago. The endless haggling to put real TV service on the internet.

It's never-ending, and all of it started with Napster and Metallica, 15 years ago.

"We weren't quite prepared for the shitstorm that we became engulfed in," Ulrich told The Huffington Post in 2013. "I think history has proved that we were somewhat right."

"It'll be in the first five sentences of my obituary, and I sort of accept that."