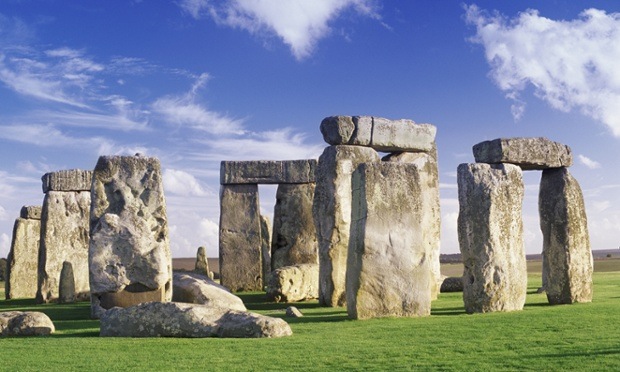 from theguardian.com: Whether it was a Druid temple, an astronomical calendar or a centre for healing, the mystery of Stonehenge has long been a source of speculation and debate. Now a dramatic new theory suggests that the prehistoric monument was in fact “an ancient Mecca on stilts”.

The megaliths would not have been used for ceremonies at ground level, but would instead have supported a circular wooden platform on which ceremonies were performed to the rotating heavens, the theory suggests.
Julian Spalding, an art critic and former director of some of the UK’s leading museums, argues that the stones were foundations for a vast platform, long since lost – “a great altar” raised up high towards the heavens and able to support the weight of hundreds of worshippers.

“It’s a totally different theory which has never been put forward before,” Spalding told the Guardian. “All the interpretations to date could be mistaken. We’ve been looking at Stonehenge the wrong way: from the earth, which is very much a 20th-century viewpoint. We haven’t been thinking about what they were thinking about.”


Since Geoffrey of Monmouth wrote in the 12th century that Merlin had flown the stones from Ireland, theories on Stonehenge, from plausible to absurd, have abounded. In the last decade alone, the monument has been interpreted as “the prehistoric Lourdes” where people brought the sick to be healed by the power of the magic bluestones from Wales and as a haunted place of the dead contrasting with seasonal feasts for the living at nearby Durrington Walls.

The site pored over by archaeologists for centuries still produces surprises, including the outline of stones now missing, which appeared in the parched ground in last summer’s drought and showed that the monument was not left unfinished as some had believed, but was once a perfect circle.

Spalding, who is not an archaeologist, believes that other Stonehenge theorists have fallen into error by looking down instead of up. His evidence, he believes, lies in ancient civilisations worldwide. As far afield as China, Peru and Turkey, such sacred monuments were built high up, whether on manmade or natural sites, and in circular patterns possibly linked to celestial movements.

He said: “In early times, no spiritual ceremonies would have been performed on the ground. The Pharaoh of Egypt and the Emperor of China were always carried – as the Pope used to be. The feet of holy people were not allowed to touch the ground. We’ve been looking at Stonehenge from a modern, earth-bound perspective.”

“All the great raised altars of the past suggest that the people who built Stonehenge would never have performed celestial ceremonies on the lowly earth,” he went on. “That would have been unimaginably insulting to the immortal beings, for it would have brought them down from heaven to bite the dust and tread in the dung.”

Spalding’s theory has not met with universal approval. Prof Vincent Gaffney, principal investigator on the Stonehenge Hidden Landscapes Project at Bradford University, said he held “a fair degree of scepticism” and Sir Barry Cunliffe, a prehistorian and emeritus professor of European archaeology at Oxford University, said: “He could be right, but I know of no evidence to support it”.

The archaeologist Aubrey Burl, an authority on prehistoric stone circles, said: “There could be something in it. There is a possibility, of course. Anything new and worthwhile about Stonehenge is well worth looking into, but with care and consideration.”

On Monday Spalding publishes his theories in a new book, titled Realisation: From Seeing to Understanding – The Origins of Art. It explores our ancestors’ understanding of the world, offering new explanations of iconic works of art and monuments.

Stonehenge, built between 3000 and 2000BC, is England’s most famous prehistoric monument, a UNESCO World Heritage site on Salisbury Plain in Wiltshire that draws more than 1 million annual visitors. It began as a timber circle, later made permanent with massive blocks of stone, many somehow dragged from dolerite rock in the Welsh mountains. Spalding believes that ancient worshippers would have reached the giant altar by climbing curved wooden ramps or staircases.