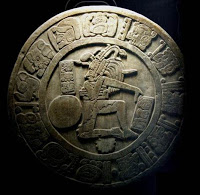 mexico adds yet another brick to the 2012 maya legend

from ap: Mexico's archaeology institute downplays theories that the ancient Maya predicted some sort of apocalypse would occur in 2012, but on Thursday it acknowledged that a second reference to the date exists on a carved fragment found at a southern Mexico ruin site. Most experts had cited only one surviving reference to the date in Mayan glyphs, a stone tablet from the Tortuguero site in the Gulf coast state of Tabasco. But the National Institute of Anthropology and History said in a statement that there is in fact another apparent reference to the date at the nearby Comalcalco ruin. The inscription is on the carved or molded face of a brick. Comalcalco is unusual among Mayan temples in that it was constructed of bricks. Arturo Mendez, a spokesman for the institute, said the fragment of inscription had been discovered years ago and has been subject to thorough study. It is not on display and is being kept in storage at the institute.