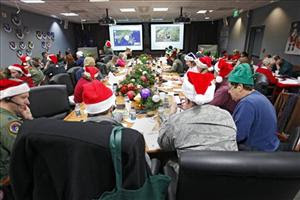 from ap: Santa Claus set records Christmas Eve he raced across the globe on his traditional holiday mission. Volunteers at Peterson Air Force Base in Colorado say they fielded about 102,000 telephone queries beginning early Saturday on his progress. That broke the previous mark of 80,000. And his NORAD Facebook page recorded nearly 999,000 'likes,' compared with 716,000 a year ago. Twitter followers increased from about 53,000 last year more than 89,000. Officials say the records were likely the result of people passing the word as well as social media interest. The North American Aerospace Defense Command has been telling anxious children about Santa's whereabouts every year since 1955. That was the year a newspaper ad invited kids to call Santa, but the number had a typo, and kids wound up talking to the Continental Aerospace Defense Command, NORAD's predecessor.