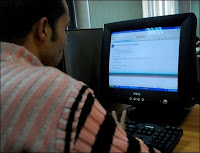 bloggers says big event could be right around the corner, iran completely cut off

from paul joseph watson: Unprecedented mass Internet outages throughout the Middle East and Asia after no less than four undersea Internet cables were cut without explanation are spurring suspicions that a major event of geopolitical proportions may be just around the corner.

According to InternetTraffic.com, Iran has been completely cut off from the Internet, though Mahmoud Ahmadinejad's blog can still be accessed.

"Stephan Beckert, an analyst with TeleGeography, a research company that consults on global Internet issues, said the damaged cables collectively account for the majority of international communications between Europe and the Middle East," reports CNN.

Officials say that the cause behind the severing of the cables remains unknown, but United Arab Emirates' second largest telecom company said the cables were cut due to ships dragging their anchors.

Is this a pre-cursor to throw a veil over an imminent staged event in the Middle East?

"What are the odds? Who benefits?" asks the Crimes and Corruptions blog. "Let's see. Iranian rapprochement: "Recent months have brought signs of a growing rapprochement between Iran and Egypt. What nation would not like this and has subs which could cut the cables? Why do it? Payback, as over the net business is badly damaged. Or is this a setup for more? Note the internet is working just fine in Israel."

Over at WhatReallyHappened.com, Mike Rivero points out that the mysterious cable sabotage could portend another imperial Neo-Con crusade in the works.

"The biggest problem the Bush administration faced during Iraq were images coming over the internet that showed the horrors being visited on the Iraqi people, and exposed the government's lies about Saddam," he writes. "I am greatly concerned that these undersea cable cuttings are intended to prevent the world from seeing something that is about to happen, other than through the government-controlled propaganda/media."