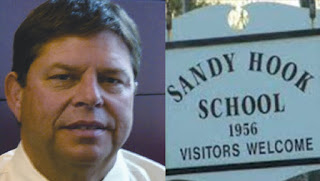 Joyce Riley, host of The Power Hour, interviews Mike Powers, who "... is a US Naval Law Enforcement and US Army Infantry veteran. Powers has 15 years experience in federal service...". Powers, a former special forces commando, examines many aspects of Sandy Hook Massacre: what is known about 1) Nancy Lanza 2) Adam Lanza and 3) the logistics of a 120 lb, 20 year old carrying four weapons and 100s of rounds of ammunition and 4) impact of discharging weapons in a closed room.   Riley poses astounding question whether Adam Lanza existed and gets an eye-opening reply:  "No. Not to any conclusive nature that myself or any of my colleagues were able to find out. I’m not going to openly say Adam Lanza does not exist, because I honestly don’t know. But what I can tell you is that through exhaustive research we have not found conclusive evidence that suggest that he was anything other then a myth at this point.”

Powers goes over also multiple revisions to identity of Nancy Lanza: "As far as the mother Nancy Lanza is concerned, it has been nothing but lie after lie after lie about her. Well, she was a Kindergarten teacher here and everybody knew and loved her. Well ooops, the players didn’t back that play. Now it’s, oh we don’t know who she is, she never worked here. We have not been able to locate any evidence to suggest that she ever had a teacher certificate on file with the State of Connecticut.”  One question addressed overlooked by mainstream media: Why would a 20 year old who graduated years earlier even be at the school?  There isn't any reason in Power's opinion.  You can access Power Hower interview here.  It's pretty interesting with aspects of story not addressed elsewhere!