from danger room: Creative Technologies Incorporated – the Hollywood-based company that grew out of the Army’s gaming lab at USC – is pairing up with defense megalith Boeing to collaborate on new sim tech for land forces. Among other things, the Army wants technology to help cannoneers stay in practice. According to the news release announcing the partnership, the companies may explore field-artillery simulation for soldiers who are in the field or home between deployments. That’s particularly important these days: in Iraq, many field artillery units have been handed convoy duty, civil affairs and military police missions, and Army leaders have been worried about erosion of high-end combat skills if artillery crews can’t spend time on gunnery ranges. This also looks like a timely business move. As Noah noted here earlier, the Army has launched a $50 million push to develop videogames that will help prepare troops for combat. This builds on the service’s interest in using videogames as a recruiting tool; Army Training and Doctrine Command even has an office for gaming. 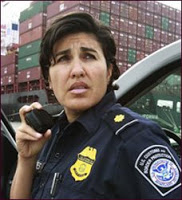 from washington post: A new reality television show focused on the agencies and employees of the Department of Homeland Security is sure to find fans among bureaucrats and department observers, and also is likely to draw some criticism from those who wonder if a primetime television show is the best use of the agency’s time. “Homeland Security USA” debuts Jan. 6 on ABC. The show’s producer, Arnold Shapiro (creator of the CBS reality hit “Big Brother“) recently told the Hollywood Reporter, “I love investigative journalism, but that’s not what we’re doing. This show is heartening. It makes you feel good about these people who are doing their best to protect us.” So while the show will highlight the main missions of the department’s 218,000 employees, it likely will not focus on less flattering incidents, like the DHS official arrested for hiring illegal immigrants, the department’s challenges with government contracting, or the inability of airport screeners to unionize… “It’s kind of a combination of the two most popular shows on TV, ‘Cops’ and ’24,'” said David Heyman, director and senior fellow of the Homeland Security program at the Center for Strategic and International Studies. 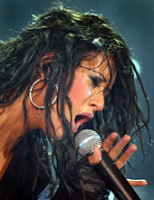 from thinkprogress: One of the Bush administration’s psychological torture techniques against detainees has been to blast loud music to deprive detainees of sleep, causing some to “knock their heads against the walls and the doors, screaming their heads off.” According to British human rights group Reprieve, these are among the songs that the U.S. has used frequently: – “Dirrty,” Christina Aguilera – “F*ck Your God,” Deicide – “Shoot to Thrill,” AC/DC – “We are The Champions,” Queen – “I Love You,” from “Barney and Friends” – “Born in the USA,” Bruce Springsteen – “Babylon,” David Gray – “White America,” Eminem – “Sesame Street” theme song… Others include Aerosmith, Britney Spears, Don McLean, Lil’ Kim, Limp Bizkit, Matchbox 20, Rage Against the Machine, Red Hot Chili Peppers, and Tupac Shakur. Reprieve has launched a new anti-music torture initiative, Zero dB.

video: musicians protest military use of music as torture