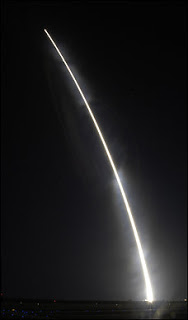 from ap: A rocket carrying a NASA satellite crashed into the ocean near Antarctica after a failed launch early Tuesday, ending a $280 million mission to track global warming from space. The Taurus XL rocket carrying the Orbiting Carbon Observatory blasted off just before 2 a.m. from California's Vandenberg Air Force Base. But minutes later, a cover protecting the satellite during launch failed to separate from the rocket, a preliminary investigation found. The 986-pound satellite was supposed to be placed into an orbit some 400 miles high to track carbon dioxide emissions. The project was nine years in the making, and the mission was supposed to last two years. Scientists currently depend on 282 land-based stations - and scattered instrumented aircraft flights - to monitor carbon dioxide at low altitudes. "Certainly for the science community it's a huge disappointment," said John Brunschwyler, Taurus project manager for Orbital Sciences Corp., which built the rocket and satellite. "It's taken so long to get here."

officials: how were bird flu viruses sent to unsuspecting labs? 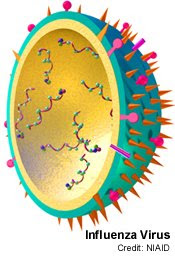 from canadian press: Officials are trying to get to the bottom of how vaccine manufacturer Baxter International Inc. made "experimental virus material" based on a human flu strain but contaminated with the H5N1 avian flu virus and then distributed it to an Austrian company. That company, Avir Green Hills Biotechnology, then disseminated the supposed H3N2 virus product to subcontractors in the Czech Republic, Slovenia and Germany. Authorities in the four European countries are looking into the incident, and their efforts are being closely watched by the World Health Organization and the European Centre for Disease Control. Though it appears none of the 36 or 37 people who were exposed to the contaminated product became infected, the incident is being described as "a serious error" on the part of Baxter, which is on the brink of securing a European licence for an H5N1 vaccine. That vaccine is made at a different facility, in the Czech Republic. "For this particular incident ... the horse did not get out (of the barn)," Dr. Angus Nicoll of the ECDC said from Stockholm. "But that doesn't mean that we and WHO and the European Commission and the others aren't taking it as seriously as you would any laboratory accident with dangerous pathogens - which you have here."

US energy dept cannot account for nuclear materials at 15 locations
from global security newswire: A number of U.S. institutions with licenses to hold nuclear material reported to the Energy Department in 2004 that the amount of material they held was less than agency records indicated. But rather than investigating the discrepancies, Energy officials wrote off significant quantities of nuclear material from the department's inventory records. That's just one of the findings of a report released [2.3mb PDF] yesterday by Energy Department Inspector General Gregory Friedman that concluded "the department cannot properly account for and effectively manage its nuclear materials maintained by domestic licensees and may be unable to detect lost or stolen material."

analyzing body language to detect terrorists & tourists
from itbusiness: As soon as you walk into the airport, the machines are watching. Are you a tourist - or a terrorist posing as one? As you answer a few questions at the security checkpoint, the systems begin sizing you up. An array of sensors - video, audio, laser, infrared - feeds a stream of real-time data about you to a computer that uses specially developed algorithms to spot suspicious people. The system interprets your gestures and facial expressions, analyzes your voice and virtually probes your body to determine your temperature, heart rate, respiration rate and other physiological characteristics - all in an effort to determine whether you are trying to deceive. Fail the test, and you'll be pulled aside for a more aggressive interrogation and searches. That scenario may sound like science fiction, but the U.S. Department of Homeland Security (DHS) is deadly serous about making it a reality.

army preparing to test future combat systems
from defence talk: Soldiers and civilians with the Future Combat Systems program at White Sands Missile Range are working overtime preparing to put future Army technology to the test. Soldiers - along with technicians for the companies that produce the various systems that make up FCS - are loading up vehicles with data collection equipment that will be used to test the systems later this year.