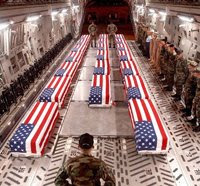 from thinkprogress: Defense and congressional officials said today that “news organizations will be allowed to photograph the homecomings of America’s war dead under a new Pentagon policy” but “only if the families of the fallen agree.” President George H.W. Bush instituted the ban on photographing flag-draped caskets at Dover Air Force Base and the Republican-led Senate backed the policy in 2004. Last year however, Defense Secretary Robert Gates ordered a review of the ban with Sen. John Kerry (D-MA) and Frank Lautenburg (D-NJ) urging the White House to reverse it shortly after President Obama took office.