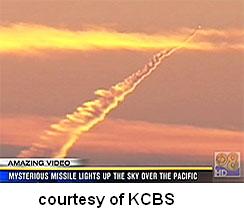 Missile Launch Off California Coast A Show of Force?

Robert Ellsworth, former Deputy Secretary of Defense in the Ford Administration, speculates on mystery missile launch off coast of California. Ellsworth offers, maybe, it's a show of force? Ellsworth solicited for his opinion as reported by KCBS, seems to entertain possibility--with Obama in Asia. The former ambassador to NATO compares Monday evening's display to similar launches in the Atlantic, which have occurred in the past for the benefit of Russia. "It's a big missile...a test firing of a intercontinental ballistic missile from an underwater submarine, to demonstrate mainly to Asia, we can do that. A display of force is less insulting to the reader's intelligence than other lame explanations served up for public consumption such as sophisticated amateur rocketeers or an airliner contrail's distorted appearance due to distance and the horizon's proximity! Is the display meant to acclimate the public to unannounced launches--so similar incidents no longer, as the octogenarian Ellsworth observed, "...takes your breath away"?