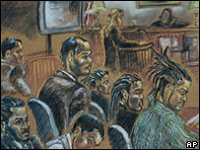 from bbc: A jury in Miami has cleared one man of attempting to bomb America's tallest building, the Sears Tower in Chicago.

The jury was unable to reach a verdict on six other defendants, and the judge declared a mistrial. The government wants to try them again next year.

The jury spent more than week assessing evidence that the defendants were allied with al-Qaeda.

The defendants were known as the Liberty City 7 after the poor area of Miami they operated in.

The acquitted man, Lyglenson Lemorin, buried his face in his hands when the verdict came in.

The prosecution had said he and the others had hoped to forge an alliance to blow up the Sears Tower in Chicago and FBI offices in Miami and elsewhere as part of a holy war against the US.

But they succeeded only in contacting a paid FBI informant, rather than al-Qaeda itself.

And the defence argued that that they were in fact hapless figures who were either entrapped by the FBI or went along with the plot in order to con the FBI informant out of $50,000 (£25,000).

update: liberty city 7 shows terror war is fraud
from rogue government: The deadlocked jury combined with admitted statements from the federal government is obvious proof that there was no terror threat from the "Liberty City Seven" and that this whole situation was provoked by the FBI. Other incidents like the Fort Dix Six raise additional questions about the federal government's credibility on the subject of this phony war on terrorism. The war on terror isn't real and if it was the government wouldn't need to send FBI informants to entrap a group of crazy people hanging out in a warehouse.