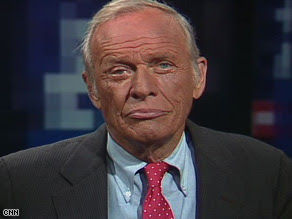 from cnn: Tom Braden, the creator and co-host of CNN's "Crossfire," which pioneered the talk-show format that pitted a conservative against a liberal, died Friday at age 92. Daughter Susan Braden said he died of natural causes at his home in Denver, Colorado. In 1982, Braden took "Crossfire" to CNN from a local station in Washington and served as the program's host "from the left" until 1989. "Many people believe that Tom created the genre of political talk shows and debate programs that has now been copied and copied and copied," said Sam Feist, CNN's political director and senior executive producer of political programming... 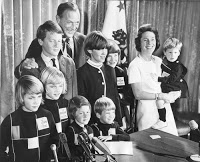 Born in Greene, Iowa, Braden graduated from Dartmouth in spring 1940, when the Germans overran France. He volunteered to join the British army, said his good friend and conservative sparring partner, Pat Buchanan. After fighting in the African desert, Braden joined the U.S. Office of Strategic Services when the United States joined the fight, then joined the CIA, Buchanan said.

embedded tv messages brought to you by the bill gates foundation?
from inspired economist: The Bill & Melinda Gates Foundation has developed a well-deserved reputation for funding innovative programs revolutionizing solutions for social issues. Navigating a path that only for-profit businesses dare venture down, the Gates Foundation funds a wide range of ground-breaking programs that challenge traditional peer-approved thinking on vaccines, agro-farming and many other treatment oriented-solutions. Yesterday, however, a New York Times article yesterday covered yet another strategy that they are pursuing, collaborative message placement in mainstream television programming. These are not your average PSA’s (public-service-announcements) donated by networks but rather longer-term initiatives that strive to create plot lines that will help disseminate accurate information on topics that are widely misunderstood. The objective is to use entertainment content as a vehicle for educating mainstream audiences on topics such as HIV/AIDS and education in the hopes of influencing public views and behaviors.

nytimes threatens to shut down boston globe
from dpa: The New York Times Co has threatened to shut down the Boston Globe unless the Globe's unions agree to 20 million dollars in cost-cutting measures, it was reported Saturday. The demands were made during a 90-minute meeting between Times and Globe executives and the newspaper's 13 unions, the Globe reported. The concessions include pay cuts, terminating the company's pension contributions and eliminating lifetime job guarantees, according to Daniel Totten, president of the Boston Newspaper Guild - the Globe's biggest union. The Globe, which began publishing in 1872, was sold to the New York Times Co in 1993.